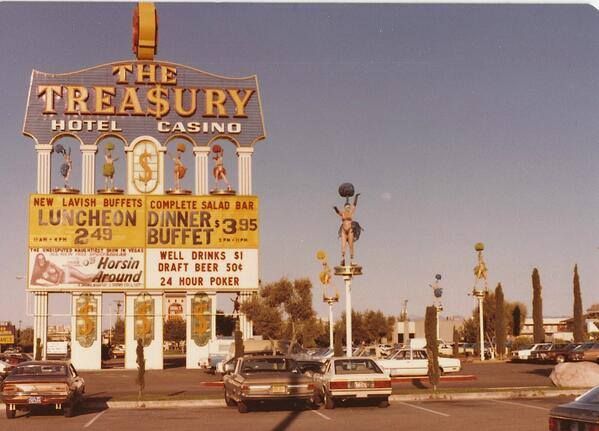 Added in Casino History on September 15, 2019 by Jim Murphy

We’re in the process of reviewing the colorful history what is now the OYO Hotel & Casino Las Vegas and until recently was the Hooters Casino Hotel Las Vegas. The property at 115 East Tropicana has possibly been through more different names and owners than any in town. We’re up to 1978 and we’ve already seen the Howard Johnson’s Motor Lodge, the Paradise Hotel and Casino and the 20th Century Hotel and Casino come and go.

It was never conclusively proven that Andrew DeLillo had a questionable background. It never really had to be because it quickly became evident that he wasn’t very good at running a casino. The place was in disarray financially when the DeLillo group took over and they were forced to infuse $3.2 million in the property to keep it solvent. After being granted a provisional license in May the Gaming Control Board started to show concern in August when debts started to outpace assets. The DeLillo group sold the property to Herbert V. Pastor who also owned the Golden Goose and Coin Castle downtown.

Pastor renamed the property The Treasury Hotel and Casino and it wasn’t long before the words ‘financially troubled’ seemed to be perpetually affixed to every story written about the property. In 1981, former New York Jets defensive end Gerry Philbin and New York car leasing company owner Thomas O’Donnell attempted to buy the property. The deal fell apart when the Nevada Gaming Control Board rejected O’Donnell’s license application due to ‘questionable dealings’ and ‘associations with unsavory persons’.

The Pastor owned Treasury was the first property in town to target Las Vegas’ growing LGBT community. In the era of AIDS, this was a pretty bold marketing move but unfortunately didn’t bring in enough business to keep the property solvent.

Gerry Philbin was finally able to complete the purchase of the Treasury, paying a reported $20 million to former owner Herb Pastor. There was just one problem–he didn’t have a gaming license. Since he purchased the property before he was licensed Nevada Gaming agents closed the Treasury’s casino on July 1, 1982 not long after the deal was consummated. At the time, news reports said that the casino consisted of 18 blackjack tables, two craps tables, a roulette table, a big six wheel, five poker tables and 525 slot machines. An estimated 125 casino employees were forced out of work as a result of the closing.

The 315 room Treasury Hotel continued to operate but I’m sure you can figure out how that went. By the end of the year, the property underwent ‘re-organization’ to avoid foreclosure. Philbin would only be able to keep juggling debts and assets for a few more years and the Treasury bit the dust.

Remember Andrew DeLillo? The Treasury remained closed for three years before Andrew DeLillo’s group once again regained ownership of the property through foreclosure in 1985 and renamed it the Pacifica Hotel. The property initially opened as a non-gaming hotel and the plan was to target the country’s growing LGBT population. Businesses were starting to figure out the economic clout of gay America but few had the wherewithal to actively seek their patronage. The Pacifica wanted to change that. Think Las Vegas was ready for a ‘gay friendly’ resort in 1985? Think again….

This was the height of the AIDS crisis and that led to some very dubious reporting and that helped stir up controversy:

“The fact that gays are the predominant carriers in itself shows that an increase in the gay tourist rate in Las Vegas will increase the potential number of AIDS outbreaks,” reasoned (Las Vegas News 3 reporter Rick) Kirkham.

“There is a County Ordinance that’s been on the books for a number of years which makes it a violation of a privileged license to have an establishment which becomes a hangout, if you will, for various categories of individuals,” said Clark County Commissioner Bruce Woodbury. “And homosexuals are one of those categories that’s listed.”

“However,” he continued, “There’s a Nevada Supreme Court decision that would throw grave doubt upon the constitutionality of that ordinance.”

The plan was to market the Pacifica as a time share destination. A company called Galliard was in charge of the time share component:

“What people do in their own lives, we have no control over,” said Galliard’s Lee Martin. “But we ‘re not creating any type of atmosphere that would promote any additional involvement or sexual contact.”

In August, Pacifica management tried to backtrack on their plans to create a ‘gay friendly’ destination:

“This is not a gay hotel,” one partner told News 3. “This is a public hotel. P-U-B-L-I-C. Nothing was actually sold by Galliard. And we’re now in the process of speaking with several parties who are interested in certain leaseholds and certain time-share arrangements regarding this property.”

“Pacifica’s management stresses that no firm commitments have been made yet on the future of this hotel,” said reporter Teresa Luce on Aug. 20, 1985. “Just that they want it to be a successful money-making venture.”

The controversy was bad enough but backtracking on their plan to target the LGBT community made it even worse. By 1986, the hotel closed.