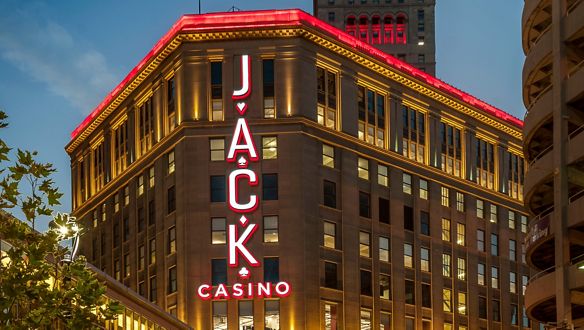 Added in Gaming Business on September 20, 2019 by Jim Murphy

JACK Entertainment–the gaming company owned by Dan Gilbert–has been in the news a lot lately. They’ve been reducing their ‘footprint’ in the gaming industry by selling a casino property in Cincinnati to Hard Rock International (the deal closed just a couple of days ago) and earlier this year selling Detroit’s Greektown Casino to a partnership of Vici Properties and Penn National Gaming. Despite the reduced exposure to the gaming industry, JACK Entertainment has announced a couple of technology deals this week.

At present, there’s not much to them beyond the paperwork. Both deals have the now ubiquitous language about ‘enabling legislation passing that authorizes sports wagering or online gaming’ in reference to the deal which includes the JACK Entertainment properties in Ohio. In the first deal, European online/mobile gaming company GAN will provide the platform for ‘sports wagering and online casino gaming’.

The second deal is with Kambi Group, who is becoming a serious international player in sports betting technology services. They’ve inked a deal with the JACK Properties in Ohio (drumroll please) ‘ should enabling legislation and corresponding regulatory approvals come to pass, with an online launch to follow thereafter’. The properties in question are the JACK Cleveland Casino and the Racino at Thistledown Race Track.

There must be some correlation between the immediacy of sports betting implementation and the length of press release quotes. Both JACK and Kambi were very succinct in hailing the agreement. First, Adam Suliman, Vice President of Sports and Digital Gaming at JACK Entertainment:

“JACK Entertainment is thrilled to announce a long term strategic partnership with Kambi to support sports wagering in Ohio, should enabling legislation come to fruition. We feel strongly that Kambi’s best in class platform, combined with JACK Entertainment’s properties and brand, will allow us to deliver the very best sports betting products and experiences to our patrons in Ohio”

“JACK Entertainment is clearly a major player in the Ohio market, and has been a primary target for us in the US as we build on our strategy to create unique and engaging sports betting experiences with visionary operators.”

“The management team at JACK Entertainment were quick to recognize the comprehensive omni-channel excellence offered by the Kambi sportsbook, and how effectively this will complement their ongoing delivery of top-quality gaming and entertainment.”

The partnership agreement also ‘includes provisions to extend the partnership into further US jurisdictions when commercially attractive opportunities arise’.

Dan Gilbert suffered a stroke in May but returned home in August after two months in a rehab center in Chicago. Before that, he was at the Beaumont Hospital in Royal Oak, Michigan. Hopefully, he’ll continue to do well. He’s a very intelligent guy who has been ahead of the curve in any number of businesses–most significantly Quicken Loans.