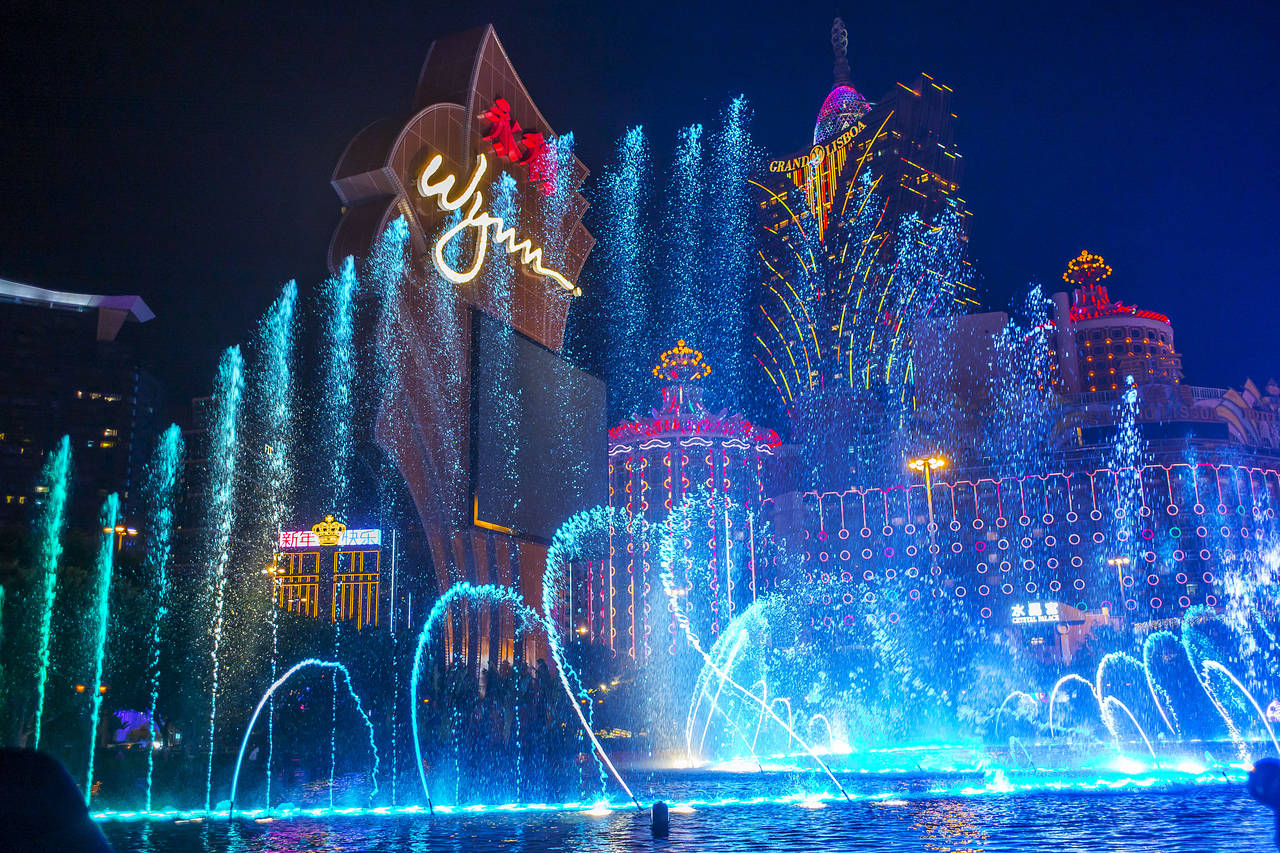 Nevada’s gaming industry isn’t the only one getting pummeled by the COVID-19 pandemic. The Asian gaming destination has been hit hard all year but April’s numbers set a dubious record for the biggest year over year drop in history. Macau’s gaming revenues for April 2020 were $94.4 million USD which represented a 96.8% drop from April 2019’s $2.95 billion USD. The Macau Gaming Inspection and Coordination Bureau (DIJC) reported the brutal numbers on Thursday.

It serves as a sobering reminder for Nevada that just because gaming properties are open doesn’t mean that the revenues will quickly return. In Macau, the big issue was border closures that limited travel from their biggest customer bases including Hong Kong. The year over year decline in April was more severe than in February when Macau’s casinos were closed for 15 days. In February 2019, Macau’s gaming revenues were a healthy $2.975 billion USD. In February 2020, revenues were $391.5 million representing a drop of 87.8%. March wasn’t much better. March 2019 saw revenues of just over $3 billion USD but March 2020’s revenue was just $661.3 million USD for a decline of 79.7%. For the year, Macau’s gaming revenues are off by 68.7% against the first four months of 2019.

Here’s the chart of the carnage from the DICJ website. Revenue figures are reported in Macanese Pataca which has the charming abbreviation ‘MOP’. At current exchange rates, 1 Macanese Pataca aka MOP is worth 0.13 USD. Here’s a helpful tip–if you want to plug these revenue figures into a currency exchange you’ll need to add ‘000,000’ to the back end of the numbers reported below:

Three Nevada companies operate properties on the Macau peninsula and the Cotai Strip–Las Vegas Sands, Wynn Resorts and MGM Resorts. As if they needed any more problems with the Nevada gaming industry shut down and now they’ve got these horrific numbers to digest.

For the long term, the Nevada gaming companies remain bullish on Macau in particular and Asian gaming in general. Las Vegas Sands had their Q1 earnings call on April 22 and CEO Sheldon Adelson had this comment:

“Now it’s not the time to pause and slowdown investment in Macao. We see the opportunity and possess both the financial strength and the strategic commitment to make additional investments. With our effort to accelerate investment in Macao, we intend to play our part in supporting the local economy in the short-term, and ensure we are in a leading position to capture the eventual recovery in tourism spending. I remain steadfast in my belief that Macao has the opportunity to become one of the greatest business and leisure tourism destinations in the world. And the MICE capital of Asia. As I’ve said on many occasions, we welcome the opportunity to invest billions of dollars in additional investment and contribute to Macao’s diversification and evolution into Asia’s leading leisure and business tourism destination.”

Later in the call, President and COO Robert Goldstein suggested that there should be some relaxation of the travel restrictions in May or June:

“We follow the same sources you do, perhaps ours is a little better. We do believe there’ll be some opening May perhaps or June, we’re hopeful. But as you know, won’t be a flick of the switch and it’s all different timing to which provinces, we’re hoping for, first the IVS is reinstated, that’s pivotal. And then the 14-day quarantine for reentry into China is equally important, as you know. I think the idea is the first place — in the 14-day quarantine, the first place we’ll see some bright lights would be in Guangdong, and then provinces will follow throughout the summer. It won’t be one flick of the switch at all provinces open equally. I think though this, as you know, Guangdong is pivotal. Once that’s open, it opens the door for others to follow. There will be a gradual process.”

Goldstein went on to speculate that Macau would rebound more quickly than Las Vegas due to the fact that a fair percentage of travel to the casino area is via train. He expects air travel to remain problematic well into the Summer both in Nevada and Macau. The transcript of the LVS Q1 2020 Earnings Call is at the link below:

MGM sounded a similar refrain in their Q1 2020 Earnings Call. Acting CEO Bill Hornbuckle said that he’s ‘as excited today about Macau as (he) was 20 years ago’ and that he expects the market to rebound quickly:

“Although to be clear, we continue to believe in the future of Macau and look forward to continuing to invest in our presence there. We have no debt maturing prior to 2022 and just yesterday closed on our credit agreement, an addendum, providing additional flexibility on our financial covenants. MGM China is also well positioned with over $800 million of liquidity. And earlier this month, it further amended its credit agreement to provide for additional financial covenant relief as well. MGP has also drawn down on its revolver for additional liquidity. We are also continuing to advance our long-term strategic initiatives. We will drive progress on MGM 2020 by continuing to reduce expenses and pursue capital projects that allow for higher margins and returns once our business fully recovers. We will continue to execute on our real estate strategy over time, and we’ll continue to invest in growth opportunities such as Japan, Macau, sports betting and online gaming. And in particular, I want to emphasize, we remain fully committed to our partnership with Orix to develop a world-class integrated resort in Osaka. Let me spend but a moment on Macau. I was recently elected to be Chairman of MGM China alongside Pansy Ho as Co-Chair. I am personally just as excited today about Macau as I was 20 years ago when I first visited.”

“We believe the market will rebound rapidly with the visa scheme and other restriction once other restrictions are loosened. MGM’s China’s properties are currently incurring cash operating expenses of approximately $1.5 million per day, which is in excess of amounts being earned, obviously, by those properties. While we are currently focused on managing the current situation and driving efficiencies with our current footprint, we will continue to invest in our properties and expand our offerings, especially on non-gaming, with more suites and more room product. I look forward to working with the new Chief Executive of Macau and his administration and to support the strategies for further development in Macau. In summary, we remain confident in the long-term outlook of our business. We had a strong start of the year, which was encouraging and points to the success of a number of initiatives such as MGM 2020 that we had recently implemented. In Las Vegas, our margins were back over 30%.”

Later in the call, Grant R. Bowie (CEO and Executive Director of MGM China Holdings Limited) answered a question from Barclays analyst Felicia Hendrix asked about the importance of Hong Kong to Macau’s recovery efforts along with travel restrictions in general:

“Well, I think it’s pretty clear that Hong Kong, Macau and Guangdong, the Greater Bay Area, are all in inextricably linked. We already know that the quarantining requirements in Hong Kong will not be lifted until the seventh of June at the earliest. Hong Kong is always an important fee to market, even many of our customers coming in from China come via Hong Kong, as you know. But on the other side of it, there is a possibility, and we obviously are sitting here hoping that’s happening, and the Chief Executive even acknowledged that he is in dialogue with Guangdong to see if there cannot be some relaxation or some progressive opening up of the Zhuhai, China border. So we know the Hong Kong date for review. We’re still positive and somewhat expectant that we may see some opportunities coming up in May for China. And it will be multistep. The first will be the removal of the return to China quarantining. And then the ultimate objective that we see coming out in the next weeks and months is the releasing of the IDF system. And that’s really the critical point for us once the IVS comes back. So Felicia, I’m sorry, I don’t have the specific timings. Those are the steps.”

“As I said earlier, talking to the customers, they’re positive, they’re confident. All of us are just sitting here waiting to make sure that it’s safe to travel. They are confident that we can take care of them. I think we’re being very good at communicating that. So it’s we’re ready to go. And frankly, after all this time, we’re very anxious to get started, as you can imagine.“

The good news is that there’s really no way that Macau’s gaming revenues over the next few months could get any worse.

Nevada Gaming Revenue Plummets In March Due To COVID-19