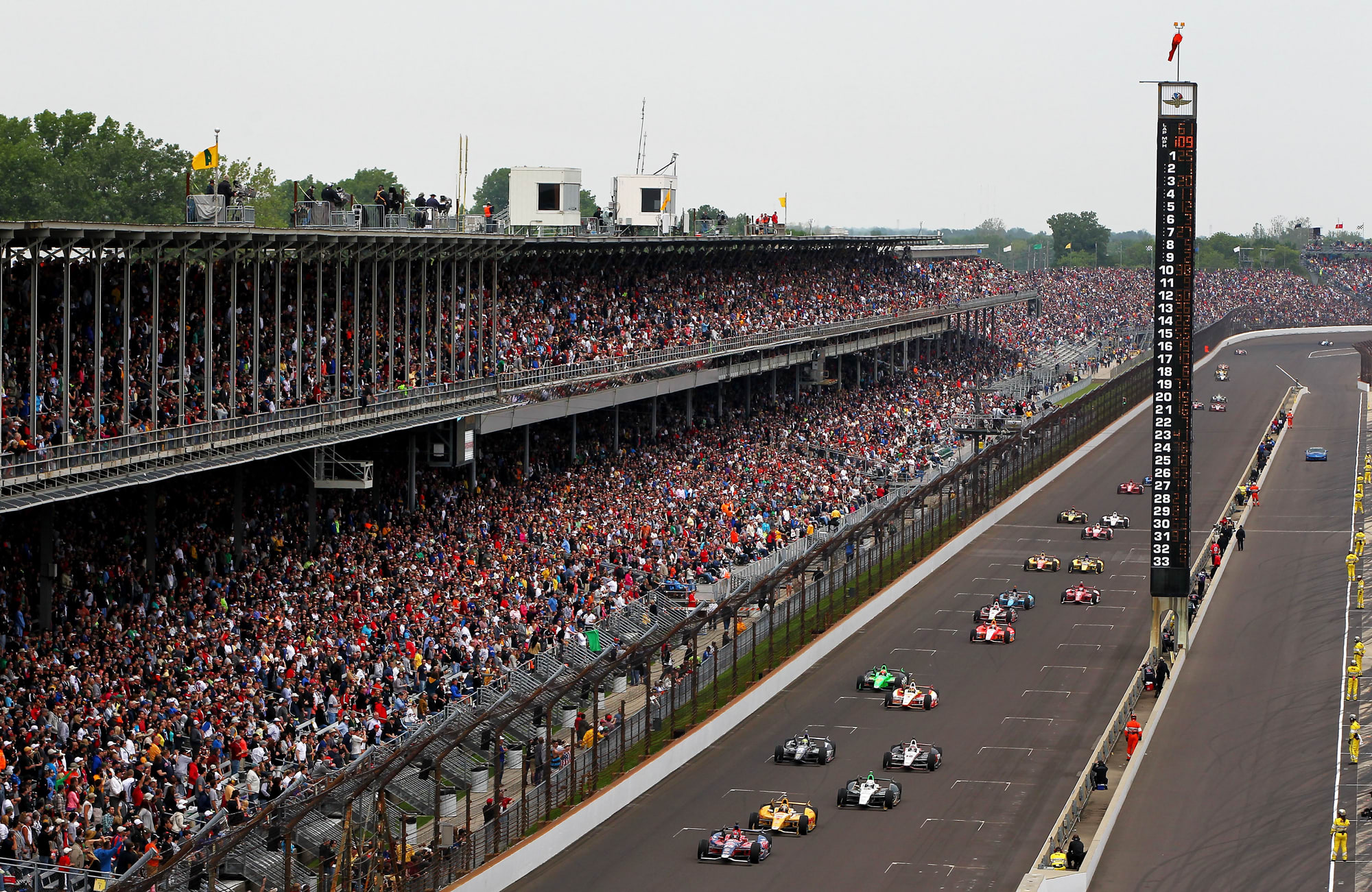 Added in Gaming Business on November 4, 2019 by Jim Murphy

Even if you’re just peripherally familiar with auto racing you’ve no doubt heard of Roger Penske. For that matter, if you’ve ever had to rent a truck the Penske name is definitely one you’ve encountered. The guy has done just about everything that a human being can do in life–he even pocketed the Presidential Medal of Freedom a couple of weeks ago. It’s not like Penske is slowing down at age 82–in fact, he just made what might be the biggest deal of his life and certainly the one with the most far reaching implications. On November 4, it was announced that Penske had purchased the Indianapolis Motor Speedway and the NTT Indy Car Series.

The Indianapolis Motor Speedway (IMS) and the Indy 500 had been in the same family for 75 years so it’s not only a big business deal but a highly symbolic ‘changing of the guard’. Tony George, who had become the public face of the Hulman family which had owned the track since Tony Hulman paid $750,000 for it in 1945, had admitted that they had taken the IMS ‘as far as we can’. What wasn’t said is that the most famous racetrack and it’s marquee race had been in decline for years. Ditto the Indy Car racing series which has fallen into near obscurity behind NASCAR. Not that NASCAR is doing great business either–auto racing in the US is hemorrhaging fans resulting in lower revenues due to declining TV ratings, race attendance, merch sales and countless other metrics.

If NASCAR fan interest and TV ratings have slumped, Indy Car racing has flatlined. Live attendance has remained strong for the Indy 500 but TV ratings have been spiraling downward for years. The rest of the Indy Car Series has a lower profile in mainstream sports than does the WNBA. It’s reached the point that the sport gets excited over a one race ‘uptick’ as the yearly ratings continue their decline. It was reported that the 2018 season ended on a ‘bright note’ since the Sonoma finale was up 15% in ratings. The ‘uptick’ resulted in a 0.38 rating on NBCSN. That’s about 1/3 of the audience that watched the WNBA All Star Game. The rest of the news wasn’t so good:

NBCSN was not alone in suffering declines this season. ABC averaged a 1.2 rating and 1.82 million viewers for its five races, down 20% and 21% respectively from last year (1.5, 2.31M) and the network’s lowest averages in at least a decade.

The racing media has long been critical of the ‘old guard’ that has been in charge of Indy Car racing for ‘doing nothing’ in the face of the sports eroding popularity. ‘Doing nothing’ is something that won’t be considered with Penske at the helm. He’s well aware of the diminished popularity and perception of the racing car series he just purchased. Furthermore, he’s looking for ways to make the Indianapolis Motor Speedway more financially viable beyond the Indy 500 and the NASCAR Brickyard 400. He’s already kicking around ideas that are considered ‘radical’ by the staid tradition of the Indianapolis Motor Speedway. He’d like to see Formula 1 return to the IMS and he really likes the idea of a NASCAR/Indy Car double header as a way to introduce one group of fans to another form of racing.:

“Well, I think it was interesting to see (Josef) Newgarden run around what they call the Roval down there in Charlotte several weeks ago, and I think it was pretty exciting,” Penske said. “I think some of the fans had never seen an Indy car on an oval or a racetrack …

“Look, we’ve got to break some glass on some of these things, don’t we? We’ve got to try some of this. I’m prepared to take a risk. No risk, no reward in many cases. Those are the things that Mark (Miles), with you and your team, that we’ll take a look at. But I wouldn’t say it’s out of the possibility.”

SPEEDWAY INDIANA: THE ENTERTAINMENT CAPITAL OF THE WORLD

He also wants to broaden the appeal of the Indianapolis Motor Speedway beyond being just ‘The Racing Capital of the World’ and transform the track and the surrounding area into the ‘overall entertainment capital of the world’:

The venerable racing personality says no door is closed on making Indianapolis Motor Speedway viable moving forward. He says the track’s claim as The Racing Capital of the World is a valid one, but he wants to make Speedway, Indiana, an overall entertainment capital of the world.

So, in addition to more concerts, yes, he’s definitely interested in all manner of events. That includes Formula 1 or an endurance sports car race.

And yes, that means a renewed commitment to NASCAR, too.

“We want to add capacity for more fan zones,” Penske said. “What can we use this space for? Can we run a 24-hour race here? Can we run a Formula 1 race here? What are the things we can do? This is a great asset. Once the tradition had been broken in adding the NASCAR race, and we’re going to get behind that in a big way, because for 27 years they’ve raced here. So, I’m looking at everything across the board to see what we can do.”

The verbiage that Penske uses over and over when talking about what he has in mind for Indy Car Racing, the Speedway and the Indy 500 involves ‘taking a risk’. He’s also spoken repeatedly about making the sport more ‘fan friendly’ and ‘increasing engagement’. Auto racing in general and Indy Car racing in particular need to broaden their fan base by appealing to a younger audience as well as the larger sports viewership that has all but forgotten about open wheel racing in North America. There’s not a simple answer for doing this but one significant opportunity has recently come online in Indiana and Penske could leverage it by taking a page out of the playbook of the PGA:

No secret that golf is a huge sport both from a participatory standpoint as a spectator event. They’re in much better shape than Indy Car racing across the board and while TV ratings have ebbed and flowed over the years they remain pretty solid. PGA Commissioner Jay Monahan is a very sharp guy and is well aware that complacency won’t do anything to sustain and grow his organization and the sport of golf. He’s recently affirmed that the PGA is going to further increase fan engagement by embracing sports betting. They’ve already partnered with Draft Kings for daily fantasy sports and have packaged their data and metrics to improve live betting products. His biggest and boldest pronouncement came a week ago when he affirmed that the PGA Tour would begin to offer on-site betting in 2020:

“You’ll start to see product in the market place next year. It’s all about engagement. … When done right, it gives fans the opportunity to engage with your sport over a longer period of time and have more interest in what’s happening across the entire player field.”

It’s all about ‘fan engagement’ which is the lifeblood for any sport. For current golf fans it’ll be a new way to interact with the sport. It also works the other way–it brings in a broad audience of sports betting enthusiasts. This audience is intrinsically beneficial and invariably a portion ‘come for the bet’ and find out that they enjoy the sport from a fan’s perspective. Monahan has figured out that sports betting = greater engagement:

“Where we are from a gaming standpoint, I’ll break it down to two points. We have for the last couple of years put all the systems in place from an integrity program to monitoring program to our ShotLink technology in place so we can be in a position to participate. The reason we would do it is because we think gaming leads to more engagement.”

There are countless ancillary benefits as well. For example, the mainstream sports media has gone ‘all in’ on covering events from a wagering perspective. A greater focus on the betting component by the organizers of a given sport or event will undoubtedly mean an increase in interest from the media and their audience.

While the PGA has a variety of regulatory issues in many jurisdictions where tournaments are held that’s not the case for the Indy 500 and the Indianapolis Motor Speedway. Indiana has done an exceptional job getting their sports betting infrastructure up and running at both the retail level and the online/mobile platform. There are already 15 retail sportsbooks at casinos and off track simulcasting facilities across the state. Online/mobile launched a month ago and Hoosier State bettors are already being served by DraftKings, FanDuel and BetRivers with a half dozen more in the pipeline including William Hill, PointsBet, FoxBet, BetMGM and Caesars Sportsbook.

There are a number of ways that the Indy 500 and Indy Car Racing could leverage sports betting but the most obvious and immediate would be on-site betting at the Indy 500. The easy way to do it would be to use existing mobile and online platforms to facilitate betting. The better way to do it would be to offer a retail betting experience similar to the one found at the state’s casinos combined with self serve wagering kiosks.

The best way to do it would be to resist the urge to give one gaming provider a monopoly on the on-site betting and open up the opportunity to any of the state’s retail or mobile providers. This would provide not only a competitive environment for odds and bet offerings but the betting providers would try to outdo each other in their promotional efforts giving the events all the more visibility. The Indiana Gaming Commission has already listed IndyCar, NASCAR and Formula One racing on their list of ‘approved events’ for betting. It would take some regulatory changes to allow the full range of on-site betting but given the importance of the track and the race to the state I’m sure it could get done. There’s also the option of setting up a permanent wagering presence at or near the IMS similar to a horse racing simulcasting facilities that would allow fans to wager on major races from all over the United States and internationally.

Other opportunities could benefit the entire Indy Car racing series. Working with sports betting providers to develop and package race data to facilitate a state of the art live wagering experience is a good first step and one that would help keep Indy Car racing front and center not only at Indiana sportsbooks but in other jurisdictions nationwide. NASCAR racing might be down in terms of popularity but it has established itself as a betting product. The same bet types–futures wagering, matchups, props, etc.–would work just as well for Indy Car racing.

Penske clearly has changes to the sport itself and the race day experience in mind. No doubt these will be ‘in the works’ quickly but the track and the sport could begin to leverage sports betting with the existing racing product. It is fortuitous that Indiana has a decent sports betting regulatory framework and a vigorous wagering industry. It offers a myriad of upside potential in terms of increasing revenue and growing the fanbase and visibility of the sport. It would be downright silly to not take advantage of it.