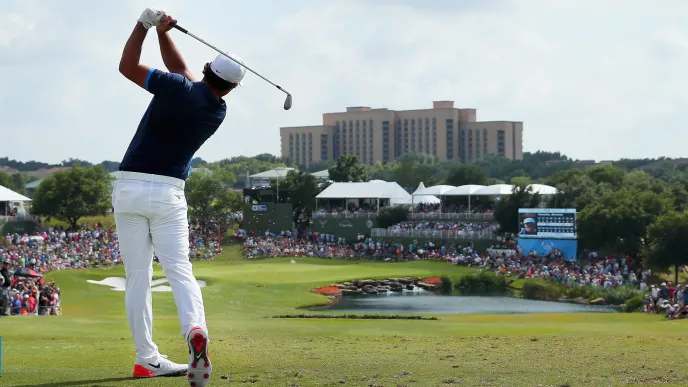 Added in Gaming Business on October 29, 2019 by Jim Murphy

For years, one of the biggest barriers to legal sports betting for most Americas was the professional sports leagues along with the NCAA. These organizations–in concert with jock sniffing politicians that did their bidding–did everything in their power to subvert the will of the people and keep US sports betting in the dark ages. Their sham came crashing down with the Supreme Court ruling on the Professional and Amateur Sports Protection Act (PASPA).

Since then, they’ve been scrambling to get a piece of the pie. Thankfully, their proposal for ‘integrity fees’ have been almost universally rebuffed though some jurisdictions have been hoodwinked into requiring ‘official league data’. Otherwise, the leagues have started to realize that sports betting is here to stay and they best figure out how to leverage it for the benefit of their organization–financially and otherwise.

The PGA was never in ranks with the NFL and NCAA as a virulent obstruction to legal sports betting. Given the prevalence of betting in golf that would be the height of hypocrisy. Since the ruling that overturned PASPA they’ve been quick to come around to the new reality and despite some initial support for a Federal government sports betting power grab they’re at the forefront of leveraging sports betting to increase fan engagement. Not long ago, they announced that DraftKings would become the official daily fantasy partner of the PGA. On the surface, that’s a small move toward sports betting but at the time I suggested that it wouldn’t be long before you’d see golf make a stronger move toward embracing sports betting–possibly using DraftKings as the official provider for live betting data.

Earlier this week, PGA Tour Commissioner Jay Monahan dropped an even bigger surprise. In an exclusive interview with AFP at the Zozo Championships in Japan Monahan said that the PGA will offer on-site gambling options for fans in 2020. Specifics were vague but there was no equivocation about the timeline:

“You’ll start to see product in the market place next year. It’s all about engagement. … When done right, it gives fans the opportunity to engage with your sport over a longer period of time and have more interest in what’s happening across the entire player field.”

Earlier in the year, Monahan discussed the benefits of betting to fan engagement:

“Where we are from a gaming standpoint, I’ll break it down to two points. We have for the last couple of years put all the systems in place from an integrity program to monitoring program to our ShotLink technology in place so we can be in a position to participate. The reason we would do it is because we think gaming leads to more engagement.”

He says that for existing fans betting will be a ‘second, third or fourth screen experience’ meaning that it’ll be an ancillary supplement to the actual golf broadcast. What he didn’t say is that they’ll also benefit from the ‘flip side’ of what he discussed–sports bettors that are just ‘looking for a bet’ and find that they enjoy golf from a fan perspective.

The PGA isn’t exactly ‘reinventing the wheel’ with on-site betting at tournaments. It’s been available internationally for years, most notably at English Premier League soccer games. While it might not be truly innovative it’s a great development for the United States sports betting marketplace on several levels. Most significantly, the more that the ‘sports establishment’ embraces the betting component the better it will be for access and legalization nationwide. This is true not only due to the symbolic perception of sports betting as being ‘more acceptable’ in mainstream eyes but due to what really makes things happen–the almighty dollar. When major players outside of the gaming industry ecosystem start to advocate for a more widespread availability of sports betting that’s when you’ll see things change quickly.

Furthermore, it’s nice to see sports leagues coming to the realization that betting is going mainstream in the US and the sky hasn’t started to fall. It’s another revenue stream for their organization and another way of experiencing their sport much in the same way that many now experience sports through video gaming. The leagues still hem and haw a bit too much about ‘integrity’ when anyone familiar with sports betting knows that the best safeguard is the eyes of bookmakers all over the world watching wagering patterns on games and events.

Maybe they’ll eventually figure this out as well but overall it’s a ‘brave new world’ as far as the mainstreaming of sports betting. Yesterday, we reported on the deal between MGM Resorts and Yahoo but equally as significant was the fact that NBA Commissioner Adam Silver and NHL Commissioner Gary Bettman contributed quotes to the press release praising the partnership. That’s something that would have been unimaginable just a few years ago.