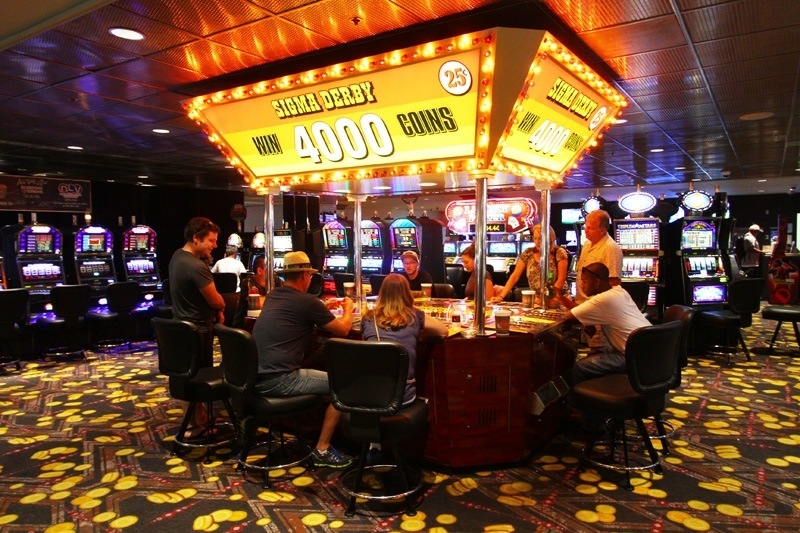 It’s somewhat surprising that a not particularly innovative and not particularly popular casino game is now considered ‘iconic’. That is the case with a game called Sigma Derby released in 1985 by the now defunct Japanese manufacturer Sigma Games.

In the highly digitized casino of today the game feels like a legitimate relic. Sigma Derby is an electro-mechanical horse racing game that can accommodate up to ten players. Five decidedly clunky horses compete in a race. Players attempt to hit a ‘quinella’ by picking the first and second finishing horses in any order. If the player correctly picks the top two horses he is paid off at the odds quoted on the machine. Players buy in and get paid out in quarters.

Sigma Derby has a theoretical house edge of between 10% and 20% but never really became a money maker on the casino floor. In a recent article in the Las Vegas Review-Journal former slot executive Charlie Lombardo explained the game’s major design flaw:

“You could never make any money on it. People could play at a quarter a time, you watch those horses race around 30 seconds, then they place a quarter again. … You could sit there with a $10 bill for two, three, four hours.”

Lombardo also remembers that occasionally one of the horses would fall over mid-game. Unlike real horse racing, when this happened they weren’t ‘vanned off’:

“It was kind of funny. Some of the bettors would complain, and you’d give a quarter back and a technician would look at it.”

The game enjoyed a brief uptick in viability during the early 1990’s–as more themed mega-resorts opened properties would often modify the game to fit their iconography:

“When Vegas started to shift toward massive, over-the-top resorts in 1990s, the Derby format also provided a unique design and marketing opportunity for casinos looking to go all-in on their themes. Caesars’s machines featured racing chariots. The Egyptian-themed Luxor had camels instead of horses. Excalibur replaced the jockeys with knights. For all of the above reasons, Sigma Derby became a fixture on casino floors across the city—and the occasional outside location, such as Lake Tahoe.”

The novelty quickly wore off and by the late 1990’s casinos began to realize that the revenue from Sigma Derby was easy to replace. The game started to disappear from casino floors simply because more money could be made with a traditional slot machine and had the ancillary benefit of occupying less space. Within a decade, Sigma Derby went from a viable gaming device to a seriously endangered species. Sigma Manufacturing went out of business in the early 2000s. This further sealed the fate of Sigma Derby since there was no longer an easy source for replacement parts. At one point Sigma Derby was a ubiquitous site at casinos all over Nevada. By early 2007, there were only three games remaining in Las Vegas.

The three games dropped to two with the closing of the New Frontier Hotel & Casino in July 2007. The two remaining games were on The Strip at the MGM Grand (though over the next decade a few of the ‘betting stations’ would stop working and weren’t repaired) and downtown at Fitzgerald’s. When Fitzgerald’s was re-branded as The D Las Vegas, the Sigma Derby machine remained. The two games clung to life until November 2018 when the MGM quietly removed their game. Media inquiries confirmed that it wouldn’t return.

Today, the only Sigma Derby in Southern Nevada (and likely the entire state) is located at The D Las Vegas. The game has found renewed popularity in it’s ‘golden years’ as a dose of nostalgia in an ever evolving city. For older players, it provides a throwback to earlier times. For younger players, many remember the game from early childhood trips to a casino. D Las Vegas owner Derek Stevens says that Sigma Derby is the property’s most popular slot machine. It even has a dedicated page on the casino’s website. Even if it wasn’t it would probably always have a home at the D–it was the first machine that Stevens ever played in Las Vegas at age 21.