Home > Casino History > The History of the Video Poker Machine 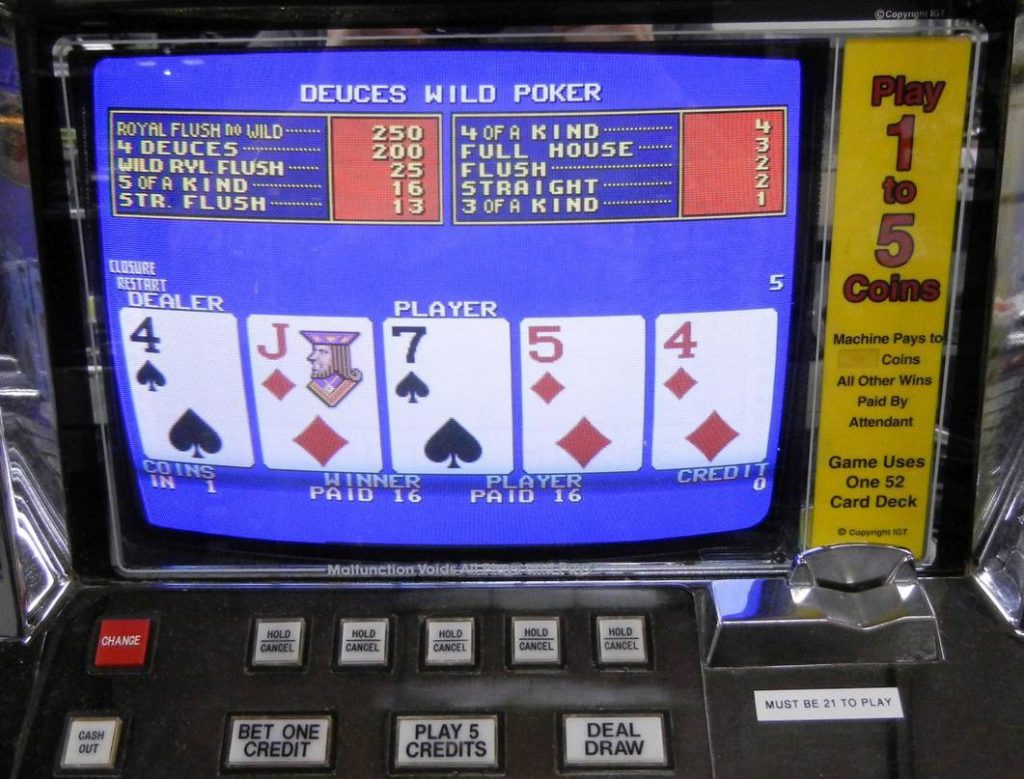 This is the first entry in a new feature here at CASINO INSIDER where we’ll examine the history of casino gaming and it’s individual components. We’ll get things started with the history of the now ubiquitous video poker machine. Video poker has always been one of my ‘go to’ games and it’s difficult to conceive of the casino experience without it. It wasn’t that long ago, however, that the casino slot machine floor was just that–all slot machines. Until the mid to late 1970’s, there were two kinds of casino games: table games and slot machines. Keep in mind that this was before video slots came into widespread use so the casino slots floor was all traditional reel type slots. Slots manufacturers tried to keep them creative through the use of theming and aesthetics but the game play was pretty much the same from one machine to another. At any rate, the bottom line was that the player would put his coins in the machine and at that point could do nothing else to influence the outcome of his spin.

This isn’t to say that there weren’t plenty of myths and ersatz traditions that made the rounds. You’d hear that pulling the handle a certain way would be more likely to produce a winning spin. Another great myth concerned the actual temperature of the coins–players believed that ‘hot’ coins that had recently been in the bowels of a slot machine where more conducive to jackpots than ‘cold’ coins such as those found in a fresh roll purchased from a change girl. Another persistent myth was to look for machines that had their reels in certain positions–the dubious rationale was that having a cherry in the center column top (above the payline) or something similar was ‘code’ that a jackpot was soon due. None of these ‘strategies’ had even a minimal amount of validity. The outcome of the reels have been determined by random number generation since the late 19th century—first built into the reels themselves, then electromagnetic and now computer controlled.

…and to some extent the traditional reel based slot machine. The mid 1970’s saw the beginning of several industries–home computers, video games, etc–due to the arrival of relatively inexpensive, television like monitors that could be paired with a solid state central processing unit. This would change things forever in countless industries including casino gambling. About the time that you’d see the first home computers in the Sears catalog or the first video games replacing pinball machines at the local arcade patrons at Nevada casinos were starting to see similar changes. One of the most significant–video based slot machines including video poker were beginning to stake their claim to the casino floor. We’ll be sure to cover the history of video slots at some point in the future as it’s also an interesting story.

The video poker ‘boom’ began in 1979 when a company called SIRCOMA (derived from the name ‘Si Redd’s Coin Machines’) introduced ‘Draw Poker’. The company would eventually re-brand itself as ‘International Gaming Technology’ aka ‘IGT’ and they remain one of the heavyweights in the modern gaming industry. Despite countless innovations in gameplay, new rule sets and a technological revolution the original Si Redd ‘Draw Poker’ design has remained the fundamental prototype for every video poker game ever released.

Although video poker didn’t immediately explode in popularity it wasn’t long before it started to catch on. It has continued to grow in popularity ever since and for awhile in the early 1990’s had commanded over 70% of the slot floor space at Nevada casinos. Today, it’s back to about 50/50 but that has more to do with the popularity of themed slot machines growing than it does with any drop in video poker play. Video poker has also become a stable at online casinos since it translates almost perfectly. In fact, many online casinos use the same software found in machines on the floor at your favorite casino. Today there are countless rule variations in addition the original ‘Jacks or Better’. The most popular was likely the addition of wild cards resulting in rulesets for ‘Deuces Wild’ and ‘Jokers Wild’.